Making a choice you never wanted to make- funerals

What is it about funeral directors that makes them fit into two equally awful categories that means an already overwhelming task feel almost impossible?

When my husband, Steve died this year, I was determined to do a funeral I wanted, nothing too out of the ordinary, although you would have thought I was asking for the earth. Instead of just using the first funeral directors I found, (why are they even called funeral directors the whole thing makes me feel I have gone back to Victorian times.) Anyway, as I was saying I decided to visit a few places to find somewhere that I felt listened to me and I felt comfortable to carry out this important task alongside the family and I.

The first types of FD are full of sycophantic whispering tones which feel so insincere- you can speak to me like a “normal” person as I am not 5 years old and actually if I was 5 it would still be offensive. Why do they feel you can’t have an adult conversation and mostly they can hardly look at you as if bereavement were catching and to be avoided, surely you are in the wrong job if you feel this is the case?

On one occasion I took my brother with me and the funeral director just completely ignored him, didn’t say hello, shake his hand, look at him, you would think basic social skills were a necessity to do this job. He just whispered “their” way of doing things to me and looked aghast when I suggested anything different. Somehow the fact I wanted less put the price up as it was not in their usual package.

The second group are business minded if you can call it that- full of endless brochures of ridiculously priced coffins and over bearing people who are not listening to a word you say but telling you what you want. E.g what fits with what they offer, they know best as they have been doing it for years and you don’t know what you are talking about. In one place, this time with my Dad we were led past a room full of coffins, could you not of closed the door and then left in the sterile, unwelcoming  “Arrangement Room” for ages until a pregnant lady came to talk to us but was more interested in talking about her pregnancy than my wishes- not sure at that point I wanted to think about new life or her concerns about bending over to hand me a brochure I didn’t want or am I being harsh?

Not in one of the places I visited was I even offered a tea/coffee, shown any real compassion, or felt welcomed, listened too or valued, if they treated me this way how would they care for my husband if I left him with them? I felt like a commodity and the prices I was quoted were also terrifying. I’m sure most people in that weird dream like, this can’t be happening, vulnerable state just go to the first place and agree with most of what is offered so funeral directors almost feel that have a captive market.

If more of us found the strength and courage at that most painful of times to say no, to shop around and go where we felt valued and where we felt our departed loved one would be valued than maybe, just maybe things would improve. 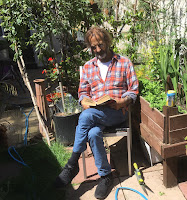 Steve as we all are was unique and I wanted a funeral in keeping with him as a man and that would support the families differing needs in saying goodbye. So, this is what I wanted and didn’t want:

There is nothing that exceptional in our requests but all the little things I feel add up to make it unique. But I was told in some places I would still have to pay for cars I didn’t use, they couldn’t get double slot for a month (although I found out later that was due to them being busy not the crematorium) I checked directly price and availability for bike hearse, they quoted me but said they are usually cheaper via funeral directors.  Out of those I tried only one quoted me the same price I had received and all rest much higher, so putting their mark up on it, but none of them wanted me to book it direct- in case something goes wrong!


By this time I was exhausted, frustrated and just angry at the lack of empathy and understanding, I was considering doing everything myself, but in reality I knew it may be too much for me to take on at that point.
I started searching online and found Poppy's I emailed my requests as I had run out of energy to speak to people and amazingly, they replied quickly, with a yes no problem to all my wishes and clear pricing that was affordable, more importantly even via email I could feel a warmth. Phone calls followed which were just as helpful and understanding, for the first time I felt heard.

When we met in their office, it was calm environment with sofas, plants and pictures, I was welcomed, given a cup of tea and put at ease immediately. They talked me through want I wanted, what they could do, nothing was too much trouble. They asked me questions, to make sure they had understood everything and gave me opportunities to change my mind. They recommended w.celebrants based on my needs that I could meet and choose, rather than one assigned to me, I chose Andrew Bone who then came to my home, spent time getting to know the family, understand Steve's life and crafted a wonderful eulogy.

In the week leading up to the funeral both Andrew and Poppy's, called and emailed several times ensuring everything was how I wanted it and checking on all the small details or just asking if there was anything else I wanted.

On the day the whole service was perfect, I’ve no idea how Andrew got Steve’s character down to a tee but he did. The motorbike and hearse with wild flowers looked stunning- Steve would have loved his final ride (although I’m sure it didn’t go fast enough for him!) Steve’s sons and nephews carried the coffin and because I had so much trust in Poppy’s and Andrew I felt able to share my tribute to Steve, feel completely present for the whole ceremony and do the small things I wanted like place one of his favourite hats on the coffin as I left. The feedback I’ve had from those who attended has been so positive, everyone felt able to remember, celebrate and grieve for Steve in their own way as the whole service felt so supportive and personal.

I feel we must change our relationship with death and the way we say goodbye to those who mean so much to us. In order for this to happen we need people in the industries surrounding this to listen to those who are grieving, adapt and really care- is that too much to ask?

If we have the strength, we also need to share our thoughts and help others in similar situations find their voice and act as agents of change.

Email ThisBlogThis!Share to TwitterShare to FacebookShare to Pinterest
Labels: Grief

Tracy Douthwaite
My vision is for a society that enables us to live a life full of meaning, compassion and contentment- my recipe for a happy life. I want to encourage conversations about mental health, well-being & grief- all subjects we often struggle to discuss or give priority in our busy societies. I would love to hear from you with your thoughts and ideas.